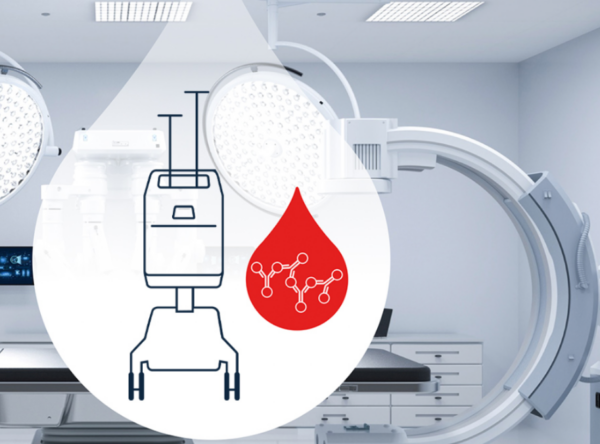 EPCAM is a tumor marker found in almost all common
carcinomas. “With the removal of these tumor cells, it should be
possible to safely return the patient’s own blood to them during
surgery,” Franzpeter Bracht, CEO and co-founder of Berlin-based
Lindis Blood Care, told BioWorld.

The first patients have already been enrolled at trial sites in
Germany.

During cancer surgery, donor blood is typically used when
massive blood loss occurs. This is the case in half a million
oncology procedures worldwide each year. However, transfusing
donor blood can lead to various side effects, such as transmission
of viruses like hepatitis or cytomegalovirus, immunosuppression,
wound infection or even transfusion-related acute lung injury.

“IBS is common in major surgery. However, it is not currently
part of the standard of care in cancer surgery because of cancer
cells that can be found in the shed blood,” said Bracht. Up until
now, using autologous surgical blood has only been permitted in
cancer surgery in conjunction with radiation, which is available in
a limited number of clinics in Europe.

Lindis was formed in 2018 by two biologists, Horst Lindhofer
and Franzpeter Bracht. The former invented and developed the
first trifunctional antibody initially approved in Europe, Canada
and Russia. The latter is a former CEO and COO of several
life sciences companies in Germany, including Celonic AG,
Glycotype GmbH, Nexigen GmbH and Aplagen GmbH.

“We are developing technology for autologous blood transfusion
in cancer patients, which uses the proven trifunctional antibody
in combination with our Catuvab device,” said Bracht.

Lindis has developed an antibody platform based on a trivalent
antibody and using autotransfusion equipment already used
in hospitals. The bispecific trifunctional antibody binds tumor
cells, including cancer stem cells, via the EPCAM markers.
The antibody then induces the bond between cancer cells and
immune cells. Resulting cell complexes are removed in two
steps: First, during a standard IBS procedure, then through
filtration using a leukocyte depletion filter.

“This mechanism of action is purely physical and does not involve
any pharmacological, immunological or metabolism action,” said
Bracht.

The Catuvab kit includes two filters, a buffer, syringes and the
antibody. Each kit is capable of cleaning up to three liters of
blood. The procedure makes it possible to transfuse autologous
erythrocyte concentrate back into the patient.

In vitro data and ex vivo pilot studies
Lindis started developing Catuvab by collecting data regarding
its ability to remove EPCAM-positive tumor cells form blood,
including cancer stem cells. It has already provided proof-ofconcept both in vitro and in an initial clinical study on patients.

The in vitro study was completed in 2019. Blood drawn from
volunteers was first spiked with tumor cells and then treated
with Catuvab and a standard IBS device. The final erythrocyte
concentrate was then screened for tumor cells and residual
antibody following the leukocyte depletion step. “The results
show very low antibody concentration; no residual tumor cells
were detected in the final erythrocyte concentrate,” said Bracht.

In 2020 the company carried out an exploratory study at a
German university in which the process was used to treat
intraoperative blood from 15 patients during cancer surgery.
Tumor cells remaining in the erythrocyte concentrates were
counted, along with residual antibodies and other safety
parameters. “Here, too, no residual EPCAM-positive tumor
cells were found after using Catuvab in this ex vivo pilot study.
Publication is imminent,” said Bracht.

An international study that enrolled up to 110 patients
The Remove multicenter, international clinical validation study
includes up to 110 patients. Markus Heiss, head of visceral
surgery at the Cologne-Merheim campus at Witten/Hedecke
University Hospital, is principal investigator. Disease indications
include lung, stomach, pancreatic, colon and ovarian cancers
and endometriosis. The primary endpoint is to demonstrate
depletion of EPCAM-positive tumor cells.

“Based on the positive data from our exploratory study, this study
should lay the ground for CE marking in the EU,” said Bracht.

Top-line results are expected in the first half of 2022.

Lindis has financial support from the North Rhine-Westphalia
and Brandenburg regions in Germany, through High-Tech
Gründerfonds Management GmbH in Berlin, Brandenburg
Kapital GmbH in Potsdam and ProFIT Brandenburg, the region’s
economic development agency.

“We are actively seeking international licensing partners to
support our next efforts outside of Europe,” said Bracht.